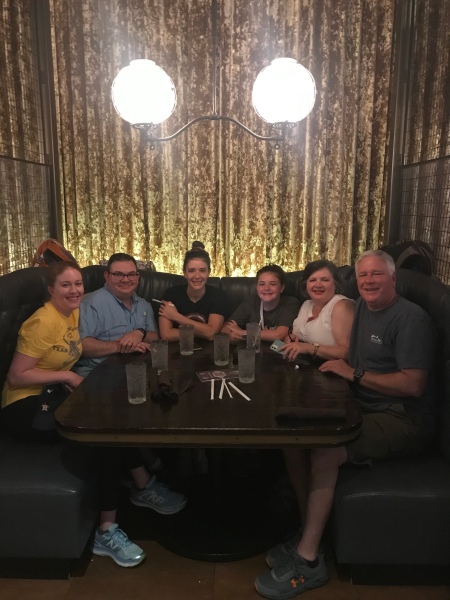 Well I seriously misjudged how long it would take me to recover from our Orlando trip. I got back home to my boys last Tuesday and didn’t find the will to unpack or do laundry for a solid week. And that was only because I ran out of clothes I like. The rest of my house is a disaster too and I just nonchalantly watched the cat shred a paper towel all over the floor without batting an eye.

We had an absolute blast. Traveling with your parents as an adult is a very different experience that I highly recommend. My daughter and son in law are my two best friends and going anywhere with them is a riot. The final member of our traveling party was my 10 year old niece, who I learned so, so much from in five days. For example, I learned how to use “boom, roasted” in a sentence, and also how to Dab and when it is appropriate to do so. This one I can’t prove for sure but I have some anecdotal evidence pointing to brain aneurysms being caused by preteens rolling their eyes at you. Boom, roasted.

What I didn’t realize until after the trip was over is that I did not feel the urge to post at all while we were there. I took pictures, albeit far fewer than usual, but something about this trip seemed private, just for us that I didn’t really want to share with anyone else. No offense. I sat at home a few days after struggling to choose photos to share and a caption to go along with them. I’m feeling differently lately about what I want to share with the world and what should be just for my family and me.

As far as tourist swamped theme park trips go, we really did do it right. I’m loath to write about the private event at Universal because I like to think it’s my own personal secret. I discovered Orlando Informer and their meetup at Universal Studios in 2018. I went by myself that year and then mama and daddy got in on it in 2019. It is just about the only way to do Universal Studios. We took it easy in the mornings, had breakfast and played at the pool. Cleaned up and headed into the parks mid-afternoon, just in time for a monster storm. When the parks closed to the public at 7 or 8pm, depending on the night, we had them to ourselves until 12:30am or later. They never say exactly how many tickets they sell to these meetups but I’ve heard it’s capped at about 10% of park capacity and I believe it. Free food, cash bars and a DJ dance party set up in the middle of the street. I always think about how much fun a lot of things would be but I’m so glad I actually talked myself into this one. Mama says she’ll never do Universal any other way again.

The only downside to staying up all night at a private party came Sunday morning when I had to set my alarm for 6:50 to try and enter the virtual queue for Rise of the Resistance at Hollywood Studios. I don’t know if my reflexes were too slow from the late night or what but we didn’t make it in on the early window. I gotta say I was not terribly sad about it because I went straight back to sleep. When we all got up at a reasonable hour we had breakfast and then decamped to different hotels for the rest of the trip. Made it to Hollywood Studios by about lunchtime and bee lined straight for Tower of Terror and Rock’n Roller coaster, like you do. We did get into the virtual queue at the 1pm window which worked out perfectly.

My hands down, absolute, no question favorite part of the trip was introducing my son in law, Tb, to the Star Wars land, Galaxy’s Edge. Daddy is an OG Star Wars lover. Like, he and his friends made costumes to wear to the premieres, made the local newspaper and then got a letter from Lucasfilm saying, “Great costumes! Now stop it” OG, so I come by it honest.

He and I got to experience the new land a couple of years ago and we were both beside ourselves excited for Tb to see it too. Both rides are great. Rise of the Resistance is only a ride in the broadest sense of the word. It truly is an immersive experience and so much fun to be a part of the story. However, I think Smugglers Run took the space cake. If Tb said, “I’m inside the Millenium Falcon!!!” once, he said it one thousand times. Not only was he inside it, he got to pilot the Millenium Falcon and he wore the biggest grin plastered across his face for the next six hours.

My last park day was Magic Kingdom and it was the quintessential Disney World train wreck. Honestly this day deserves its own post if I ever feel up to it because I don’t want to kill this fun piece by griping about how poorly Magic Kingdom seems to be running these days. They have their own giant shoes to fill if they want those of us who grew up with the Mouse to stay in the family and pass the love on to ours. Nostalgia can only take you so far.

All in all, so much fun, so exhausting and so very good to be out in the world again. I couldn’t have asked for a better travel group and I’m so proud of the kiddo for hanging tough with us. She’s so cool and mature I often forget she’s only 10 and I definitely forget what a pain I was at 10. And 20. And yesterday. I think she had a good time too because we’re already making plans for future trips. Next time we’ll probably do something more chill and relaxing though, like running with the bulls in Pamplona. 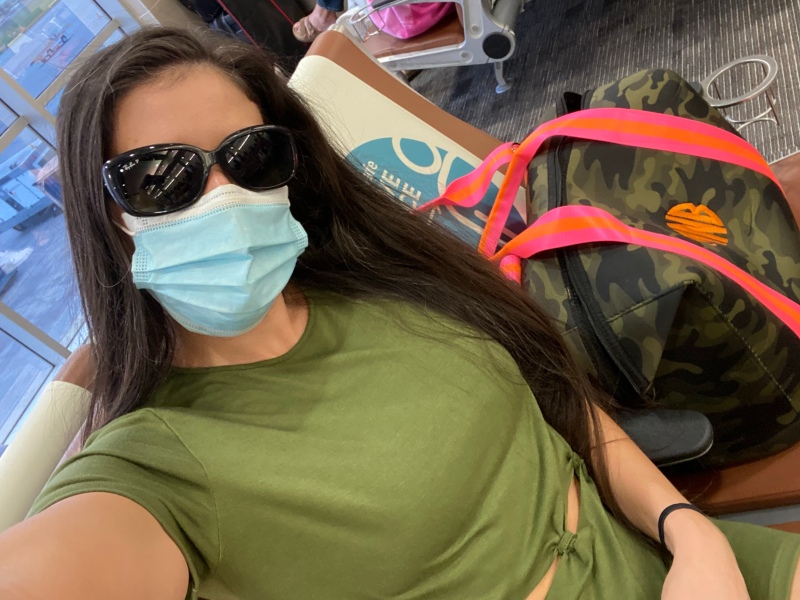 I’m sitting in the airport for the first time in 18 months. Interestingly, or maybe not, I’m heading to the same place now that I was then. Just a few months before the world shut down and life as we knew it was gone.

Not gonna lie, I’m nervous. Not about getting sick or even Covid at all. I’m nervous about rejoining the world of the people. The Land of the Living. I like my little coccoon. I like seeing only the Boy, the Pind and the cat most days. I say I miss doing things and being around others but the few times I have lately it’s been very overwhelming. Overstimulating and stressful.

Of course I could have dipped my toe back into the public pool with a mini trip. To a place without big crowds of loud people. A quiet spa somewhere maybe. A training wheels trip if you will. But no.

I will survive and it will be fun. I’ll be with some of my favorite people who will ensure a great trip with lots of laughter. But the nagging low grade anxiety is still there. In my defense, that’s always true going to Disney World, even pre-pandemic. Second only to perhaps an actual war zone, Disney World is arguably one of the most stressful places on the planet. Because nothing is easy. Nothing is intuitive. Deadlines to remember, reservations to make, plan every detail a year or more ahead or miss out. You didn’t book your dinner plans exactly 60 days to the second in advance? Oh well too bad for you. Even then it’s a crap shoot. Better obsessively check the app at the crack of dawn every morning like an addict looking for a fix. And 60 days is actually *better*, it used to be six months. Who knows what they want for dinner 180 days in advance??

Why is it that the people who line up the most hoops for us to jump through are the same ones that say, “Just relax and enjoy yourself!”

That’s not how it works, boo boo.

Cross my heart I’m really not as salty as I sound. It’s going to be lots of fun. It’s always fun and will be even with the new policies and procedures. It will be even if it rains every day. The people I choose to travel with are always fun even if we sometimes yell at each other in EPCOT. Now that all the planning and pre-vacation work is done, I do intend to relax and just go with the flow as much as possible. I’ve done all I can to make sure we have a good time and now it’s the little things, the happy accidents and silly predicaments, that will be what we laugh about when we tell stories about this trip.

I already miss my boys and my comfy chair on the ranch. I know the Boy will take good care of my sweet old doggie. And I’m honestly looking forward to a break from full time caregiver. No matter who you’re taking care of and how much you love them, that is a very draining role.

Now I say goodbye, it’s time for me to board. I’ll be home to my babies next Tuesday. I plan to stare at the wall all day on Wednesday but then on Thursday I may be recovered enough to write a post trip review and share some photos.

Y’all have a wonderful week and please pray for us as we venture out into the happiest place on earth.